I keep praying for patience with this house remodeling--but I want it RIGHT NOW!  I am tired of living out of suitcases and boxes, but I know I will REALLY appreciate the house when it is finished!  In the past week or so they have finished almost all of the outside siding and all the windows and doors are in! 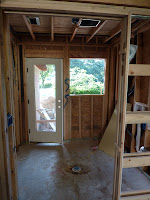 They have done a myriad of things that are very important, but are hard to see as far as progress goes.  They gave us a color sample of the stucco that will go over the bricks but we thought it was a bit too dark and muddy looking.  And I went out to pick out the granite for the kitchen counter tops and am going nuts with all the choices.  I ended up with four samples that I have been carrying around and looking at every day.  Decisions, decisions! 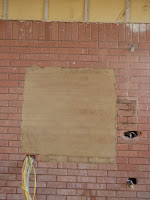 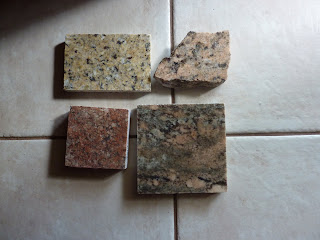 Occasionally Bossy Mama and her herd come by the house for an inspection--and probably a handout also! 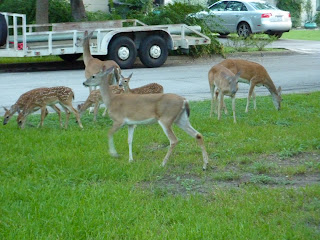 I finished a painting of the Rancho de Taos and plan to give it to a friend.  I have been working on some maroon bluebonnets all summer and they are driving me nuts with the amount of detail in the flowers and leaves.  I will be glad to finish that picture and move on to something else. 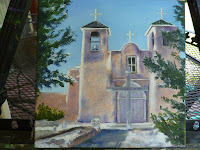 Last week I escaped all the building madness and went to help out with grandchildren.  I had a great time!  They kept me laughing and I enjoyed playing with them.  I took them to "school" the morning I left and they were waiting on the stairs for me to gather up their lunches. 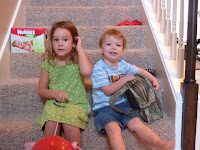 And this next week we get to see another set of grandchildren.  What fun it is to have them come visit.
Posted by Pat's Place at Sunday, July 25, 2010 5 comments: Links to this post

We had a quick visit from Son #4 and family yesterday.  They came to town to look for a couple of items that they could not get in their small town for their new house, and also to check out the progress on our house.  I think they were pleasantly surprised to see Son #4's boyhood home in its new, altered state. 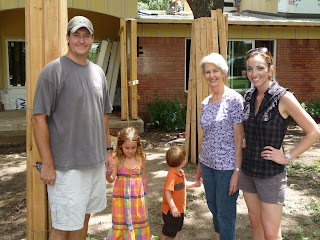 We also had time for some sidewalk art and blowing bubbles. 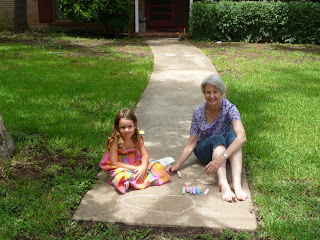 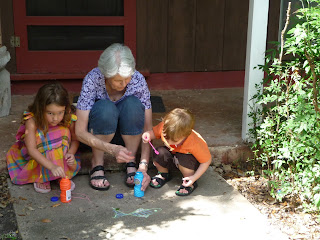 After that I fed everyone brownies and ice cream and Son #4 loaded the children up for their drive back home.  Sorry, Son #4.  I hope the children did not eat enough sugar to make them hyper for the trip!
Posted by Pat's Place at Sunday, July 11, 2010 4 comments: Links to this post

Due to rain and waiting for inspectors, nothing much has happened with our house remodeling for about a week.  Cannot complain about the rain though after our dry, dry summer last year! 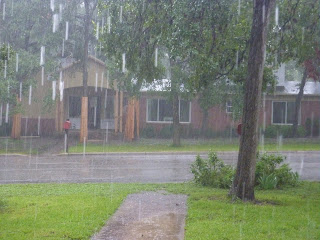 However, I want to talk about a wonderful thing that happened to me this week.  I always wanted to try watercolor painting but the process of painting with watercolors has always really scared me off.  About nine months ago I went to a watercolor demonstration at a local art shop and the artist encouraged us to try her paints and paper after the demonstration.  I expressed my hesitation and she assured me that I would only ruin about 35 cents worth of paper and that it was worth the try anyway.  I tried it and LOVED it!
This particular artist, Kathleen McElwaine is known as the BusPaintings Artist around here because she commutes an hour each day to work and another hour back home.  She has developed a kit to use and she paints on the bus or the commuter train.  I purchased materials and made a kit of my own and I use it to paint both at home and when we travel.  I cannot do that with oil paints, so watercolor is my "travel paint."

She made me look wonderful!  She clothed me in my favorite winter color--a deep lavender--and painted me without my glasses.  She did not know that purple and lavender are among my favorite colors and she did not know that I had cataract surgery and don't need glasses except for reading now.
The best part is that she sent me copies of the painting by e-mail to use with her permission.  AND, she is sending me a copy of the original which I will frame and hang with pride!  What a gift!  I cannot thank Kathleen enough!
Posted by Pat's Place at Thursday, July 08, 2010 7 comments: Links to this post

Last weekend we met Son #1 and family at Uncle P's and the men played around with some machinery while we women shopped.  I got a good picture of the men in the family but the women thought it was way too hot and humid to even get out of the car for the picture. 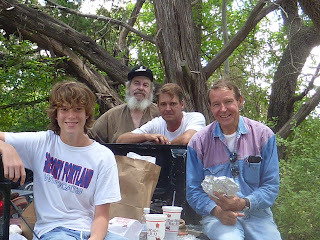 This was a slow week for our house.  The electric, plumbing and a/c people put the finishing touches on their work in time for inspectors next Monday.  The roof people did a bit of work and the cornice people put more siding on the front of the house.  The front porch really looks nice now! 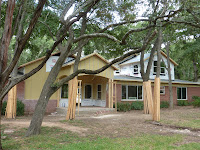 However, we did have a fair amount of rain this week and it slowed things down a bit and even the inspectors would not come if it is rainy.  Hopefully we will have more progress on the house next week.

The rain did not keep the fawns away.  These two were sitting on our lawn late yesterday afternoon. 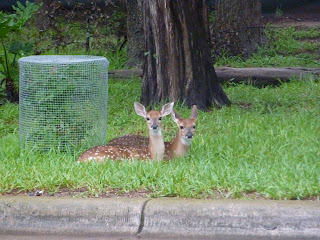 The cage beside the fawns protects a crape myrtle that the deer ate to the ground twice last year--I named the crape myrtle Lazarus because it came back each time.  Seems like those two little ones would like to have a taste!

Meanwhile, we are celebrating the 4th of July in our neighborhood.  This morning we had our annual parade and lots of the neighbors gathered on the driveway across the street for visiting, Mimosas, and picture-taking. 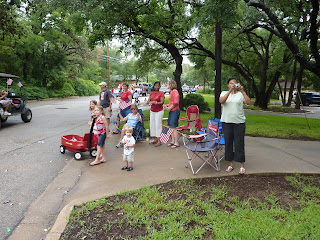 Some of the children in our neighborhood decorated the vehicle shown below last night and one of the dads drove them in the parade.  Looks like they were having a great time. 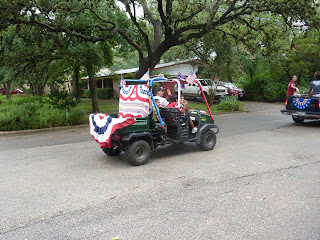 Happy 4th of July to everyone!
Posted by Pat's Place at Saturday, July 03, 2010 3 comments: Links to this post