This is not a book of mine, but one that I helped get published. I have a friend, Lawrence Seeger, who is almost 82 and is very literate. He reads all the time, does some writing of his own, lots of genealogy and, after I had introduced him to the rictameter form of poetry, began writing several rictameter poems each week.

An example of one of his poems is:

Poems
Are fun to write
They just pop in my mind
They're like popcorn in a popper
They fill up the pan and then flow over
The words are like kernels of corn
I love making poems
They're really great
Poems!

After I had accumulated about 50 poems in my e-mail in-box, I suggested that we organize the poems into a booklet, add some pictures and self-publish the book through Lulu.com in time for Christmas gift giving. Lawrence was excited about the task and together we assembled an exciting book for his family for Christmas. 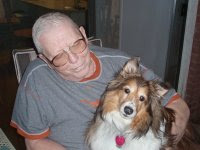 Lawrence and his best friend, Laurie!

If you are interested in ordering the book, it is listed at Lulu.com, and it is listed as "Lawrence's Rictameters." Congratulations, Lawrence!!
Posted by Pat's Place at Sunday, December 27, 2009