I have mentioned being thankful for the the wildlife in our neighborhood before. Today I would 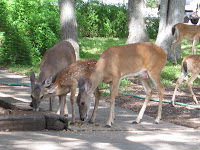 like to be thankful for Bossy Mama and her friends who came into our lives several years ago. She is a beautiful doe who wanders through our suburban yard periodically and is obviously the leader of a pack of 10 to 15 deer. Several summers ago our grandchildren were coming to visit and they always loved to see the deer, but the deer did not always come around during their visits. 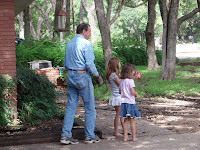 them on a more regular basis. He researched the best food for the deer and put it out in a small dish near the front windows of our living room. The deer began coming in almost every day and my husband has continued to feed them. We have now made friends with them and named a few of our favorites. Bossy Mama always appears in our yard and checks out the food dish. If there is food, she somehow communicates this to "the tribe," as we call them, and they come running down the street. Bossy Mama eats, but I have also seen her clobber a deer with her hoof for being too greedy. She keeps those deer in line!

If there is no food out for the deer, Bossy Mama watches us with her soulful eyes and almost 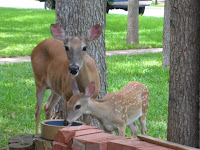 seems to talk. She has also been known to stomp her foot if we are slow to put out food and she will march into the garage, if the door is open, and begin eating the food my husband stores in there. Recently, my mother and I were leaving in the car and Bossy Mama was standing by the driveway waiting to sample the smorgasbord in the garage when I hit the button to close the garage door. It was comical to watch her expression of surprise and disgust as she looked from us to the closed garage door and back again. She actually stomped her foot and snorted at us! Mother and I had a good laugh over Bossy Mama's reaction! 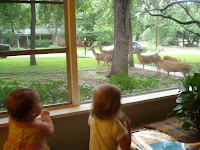 husband put out food for the deer. We then go into the living room for a front row seat of entertainment. In the early part of the summer Bossy Mama is the first new mama to bring her babies for us to admire. She always has twins and is a very good mother to 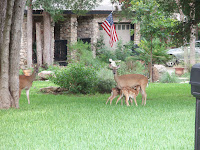 them. They follow her around for a year or two until they begin to have their own families. We have noticed that Bossy Mama is partial to some of the grownup deer and we suspect that they were her babies.

Last summer I had surgery and was in bed for a couple of weeks. Each afternoon one of Bossy 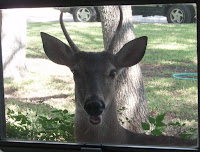 Mama's young bucks that we have named Bush Buck came and rested behind the bushes in front of my bedroom window. About 3:00 each afternoon he stood up and looked in the bedroom window and began moving his mouth like he was talking to me (or maybe chewing his cud). I talked back to him and we carried on a conversation for five or six minutes until he wandered off down the street. Even now, I sometimes find Bush Buck between the house and the bushes looking in the window. I always wonder what is going through his mind when he is outside looking in.
Posted by Pat's Place at Wednesday, April 09, 2008