My father was a quiet man, but very interesting. He worked almost his whole life for a wholesale hardware company where he began in the warehouse stocking inventory for shipping materials out to a five-state area. He moved up to salesman and traveled a large territory in the upper Texas Panhandle for many years. In his later years with the company he moved to the main office as head of the buying department. 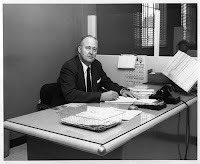 
The best vacations that I can remember are the ones that Daddy used to plan for us. His

company gave him two weeks of vacation each year and he always “put in” for the last two weeks in July. In his job he drove miles and miles each week to cover his territory. However, for his vacations, he always took us on marathon trips throughout the Southwest. We visited national parks and stayed in small motels along the way. Most of our trips west followed the now famous Route 66 from Texas to New Mexico and across to Arizona. We also took trips up into Utah, Wyoming, and Colorado.


My sister remembers our trips to the local train station and how Daddy depended heavily on the local trains to deliver his carefully completed orders to his company by Monday morning. On Sunday evening, we would all pile into the wood-paneled station wagon and head for the local depot which was built up on an incline surrounded by green, grassy slopes that provided us with the perfect playground to roll or slide down. Sometimes we walked down the brick platform and jumped onto the tracks to practice balancing with our arms outstretched like graceful gymnasts. We were never far from Dad's long reach, and he always knew when the train was approaching the depot. He thoroughly enjoyed explaining to us the facts and pitfalls of business along with his life's wisdom. Mailing his work orders to the company and getting them there on time were very important to him. He had marvelous work habits that left lasting impressions on all of us children. He let us carry the large manila envelope containing his purchase orders for the week to the depot's mail room where he paid the postage so that the envelope would be placed on the next freight train headed for Amarillo.

We could hear in the distance a faint whistle as the train approached and we could see it stop at the water tower to fill up on water. I then chugged slowly into the station area. Many times a passenger train would roll into the station dropping off travelers coming home from an exciting excursion or picking up new passengers headed somewhere beyond Pampa. We watched fascinated as men unloaded baggage onto carts that could be pushed from either end. We liked to play on the baggage carts, and Dad at times pushed us up and down the brick walkway while waiting for our train.


The mail car usually followed the engine at the front of the train and had a double Dutch door located at the rear of the car. The top half of the door would be open, and we could see the lighted interior that contained a wall of small cubicles where mail was sorted. The mailman positioned himself at the open door where he leaned out and grabbed the mailbag hanging on a hook over the tracks. As the train left the station, we could see the red light on the caboose twinkling and dancing as it disappeared into the night. We returned to our car where mother was patiently waiting and sometimes we headed to the local Dairy Queen for a brown derby before heading home for bed.


My sister says that she treasures those moments spent with Dad when he offered his bits of wisdom. These talks with Dad are now gone with the passing of time--never to be repeated but only to be relived through family stories.

Happy Father's Day to all fathers who might read this blog today.
Posted by Pat's Place at Sunday, June 15, 2008