Aunt Patty was my mother’s unmarried younger sister. I was named for her. She was really an 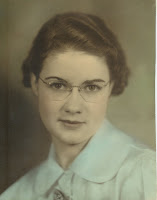 unusual person and when I was young, she lived with us and often went on vacations with us. As I grew older, I really enjoyed talking to Aunt Patty because she never seemed to see things like other adults. I think she never quite grew up and retained some of a child’s way of thinking about the world.
Aunt Patty was short and petite. She wore thick glasses and had beautiful skin—even up until the time she died. She always dressed well and collected many things. Her house was filled with tiny ceramic animals, owls, statues of saints, medals, and unusual musical instruments that she never quite mastered.
When I was seven Aunt Patty let me stay with her for a while after my brother was born and Mother was sick for several months that winter. I resented having to stay with Aunt Patty because Mother took my new brother and my sister and went to stay with my grandmother. I loved going to grandmother’s house and felt left out. I stayed with Aunt Patty in her tiny apartment with the Murphy bed and I slept on her couch. She always cooked a post roast on Sundays and then it seemed like she fed me ground roast beef sandwiches every day. I cannot stand the thought of those sandwiches now. I was so glad when my mother returned and rescued me from those ground beef sandwiches.

When my grandfather died, Grandmother moved in with Aunt Patty in Pampa. At first they lived side by side in the Kelly Apartments, just a block from our house. However, they soon moved to a house that Grandmother rented at 1901 Duncan Street. I am not sure Aunt Patty was all in favor of that, but 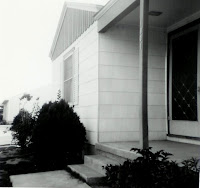 Looking back on it, I think Aunt Patty was never too happy during those years of her life. We

always received lots of letters filled with grave details of her many and various ailments. I believe she was always looking for a fairy tail life with a “living happily ever after ending” and she never found that kind of happiness. She continued to live alone in Colorado Springs even after Grandmother died. We visited her the last time in 1999.
Through the years the unusual letters, antics, gifts, and activities of Aunt Patty always amused us. Most special to us were her Christmas presents. We miss those crazy gifts now that she is gone. Her gifts at Christmas (and sometimes on birthdays, too) were large boxes of the most unusual things imaginable—inexpensive things she ordered from mail order catalogs and magazines plus things she bought from Wal-Mart or the drug store. Her gifts to our family rarely ever matched the person she sent it to. We usually saved her box of gifts until the last to open with groans and then laughter at what she had sent. We giggled as we unwrapped the packages and tried to figure what they might be used for—often trading out our gifts. Christmas has lost some of its fun in the years since she died.
My final laughter came when Aunt Patty died and everyone gathered for her funeral and burial. I am told that the cousin in charge of her affairs opened the envelope containing her last wishes and began to roll his eyes. He told us that Aunt Patty wanted to be buried in a plain pine box standing straight up facing Pikes Peak in a plot she had specifically chosen at the cemetery. The funeral home people also rolled their eyes and said, “No!” The plain pine box did not meet funeral codes and they would not even consider the “standing straight up” part of her wishes, so Aunt Patty is probably resting uneasily, having been buried in the “normal” way—but “normal” she was not and I miss her in our way-too-normal family!
Posted by Pat's Place at Saturday, April 19, 2008