Another Graduation in Our Family

Last night Son #4 graduated from college. It has been a long road for him but he finally made it across that stage. His wife, 2 year old daughter, 1 week old son and I watched on a live webcast 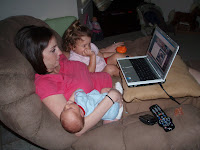 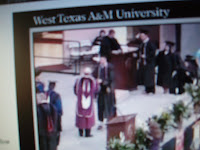 blurry at best, but we really felt connected by being able to see the actual graduation as it happened--thanks to modern technology!


A family friend wrote the following rictameter poem in honor of his graduation.

At last!
It's happening
The struggle is finished
Graduation is accomplished
It is a fait accompli; it's all done
No more burning midnight oil
No bibliographies
It is over
At last
--L. Seeger
Congratulations, Son #4!
Posted by Pat's Place at Saturday, August 09, 2008