THE BEST VACATIONS EVER

THE BEST VACATIONS EVER

The best vacations that I can remember are the ones that Daddy used to plan for us. His company gave him two weeks of vacation each year and he always “put in” for the last two weeks in July. He was a traveling salesman in the Texas Panhandle and he drove miles and miles each week to cover his territory for his wholesale hardware company. However, for his vacations, he always took us on marathon trips throughout the Southwest. We visited national parks and stayed in small motels along the way. Most of our trips west followed the now famous Route 66 from Texas to New Mexico and across to Arizona. We also took trips up into Utah, Wyoming, and Colorado.

Each year my dad began planning for our vacation right after Christmas. He started by bringing out his collection of maps of all the states in the Southwest that he was interested in that year. He then began to map out a route by calculating how far he could drive each day and what we 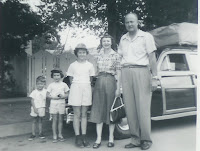 could see along the way. He also ordered books from AAA telling about all the sights that we could see on his mapped-out route. This process of planning our trip took weeks and weeks. We began to hear about the wonders that we would see and then we three children poured over the books with him during the spring months. By the time we were ready to leave in July, we had a good idea of all the wondrous sights we would see that year.

We began packing for our trips a couple of weeks before we were to leave. We took the usual things like cameras, summer clothes, bathing suits, water jugs, picnic supplies, and an old army cot for my young brother to sleep on in the motel or tourist court, as they were called in those days. In addition to those necessities, we packed games to play and crafts to work on in the car, and piles of books to read along the way. These trips took place during the 1950s in a car that was not air-conditioned. There were five of us in our family: my parents, my sister, my brother, and myself.

Our trips took us over many miles and my dad had certain rules about those trips. The number one rule was that we got up early each day and drove as hard and as fast as our car would go until we either arrived at an interesting stopping place or it was approaching dinnertime. We usually stopped for dinner at night at a restaurant unless the motel had a place where Mother could cook our supper. We had breakfast in our room in the motel—donuts and sweet rolls—and for lunch, we stopped for a picnic that Mother fixed for us. We always stayed in one room in the motel, with a bed for Mother and Daddy, a bed for my sister and I, and the old army cot for my brother. Our whole family went to bed early and read until time for lights out. The next morning we set out for that day’s destination on our map.

We children were not allowed to fight (too much) and we were encouraged to occupy ourselves while riding in the back seat of the car. We did finally acquire a station wagon—a “woody”—and that helped us to spread out somewhat. I believe it was at this point that we began including Aunt Patty or my grandmother in those trips. When we were traveling, we often folded down the two back seats, making a flat surface, and played card or board games while sailing across the desert southwest. Definitely no seat belts in those days!

Those trips were often so hot. Mother filled the water jug with water, and ice if available, each morning at the motel and, in the heat of the late afternoon, we wet washcloths that Mother had brought with the still-cool water to put on our faces and necks to cool down.

It is amazing to think how we managed to travel like that in those days. Places to stay were much more primitive than now and travel was not as streamlined and comfortable as it is today. However, we had great times on those trips and I remember the beauty and majesty of the Grand Canyon, the Painted Desert, Yellowstone National Park, Bryce, Zion, Mesa Verde and their beautiful mountains and colorful desert scenes. I treasure those memories and I am so grateful to my dad for taking us all those places.
Posted by Pat's Place at Wednesday, March 05, 2008