A Bit of Texas History 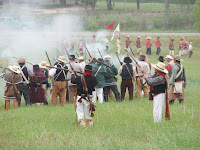 Bahia and the Mission Espiritu Santo for the 23rd Annual Goliad Massacre Living History Program which provided an accurate reenactment of the famous massacre of Colonel Fannin and his men in 1836. The reenactors wore uniforms and clothing of the time period and the weapons used were accurately depicted. The reenactment began with Fannin's troops abandoning Presidio La Bahia, under orders from Texian General Sam Houston. Fannin's men were to meet General Sam Houston's main army but delays slowed down the Texians. They were about nine miles east of Presidio La Bahia when the Mexican Army surrounded Fannin's men in an open prairie and a 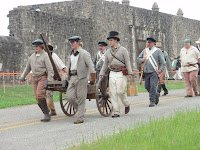 two-day battle ensued and became known as "The Battle Of Coleto Creek." On the second day of the battle Fannin surrendered and those men that were not wounded were returned to Presidio La Bahia and held in the chapel. Those that were severely wounded remained at the battlefield for up to three days. On March 27, 1836, Fannin and 341 of his soldiers were executed under orders of General Santa Anna. The massacre at Goliad was an important turning point in the Texas Revolution and this act of infamy was later recalled at the Battle of San Jacinto with the cry, "Remember Goliad! Remember the Alamo!" This reenactment gave us a new perspective on the horrors of war--especially the death scene, which I did not photograph. 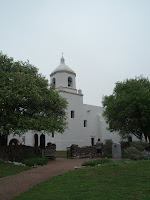 Across the highway from the Presidio La Bahia was the Mission Nuestra Señora del Espíritu Santo de Zuñigla. It was established on the San Antonio River in 1749. For more than 70 years, the Franciscan missionaries taught the native Anarama peoples religious principles and craft skills they needed to become good Spanish citizens on the remote northern frontier. The immense herds of cattle that supported the mission population became the foundation for the ranching industry of modern Texas.


After our day in Goliad, we drove over to see Son #4 and his family. Granddaughter, Ella, 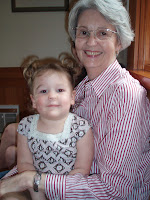 entertained us at dinner and we caught up on her new counting skills. As you can see, Grandmother really enjoyed the visit! 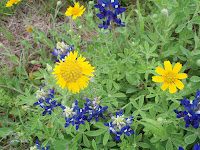 And the wild flowers were gorgeous!
Posted by Pat's Place at Monday, March 31, 2008