the Texas Panhandle. Those sidewalks surrounded our whole block except for the space in front of Billy Bob Caldwell’s house down the hill towards the dry creek. I am not sure why their sidewalk was missing, but their house was set way back on their lot and they used their front yard as a parking lot for a number of old cars. There always seemed to be men there taking parts out of those cars or putting things into strange places under the raised hoods.
The rest of our block had sidewalks that we children used mainly for roller skating. The concrete sidewalks were installed in squares. The squares were probably originally flat on the ground. However, huge elm trees that grew along the curbs in most yards sent out bulky roots along the surface of the ground and those roots caused the squares of sidewalk to tilt at various angles. 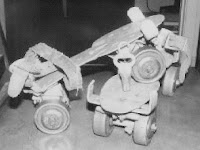 Some squares were even cracked into two or more pieces. This interesting phenomenon made roller skating quite an adventure. The tilts and humps of the sidewalk caused us to become skilled at navigating the ups and downs and the bumps and dips that we encountered as we sped around the block until we came to Billy Bob’s front yard. We could not skate in the dirt for fear of clogging up our ball bearing wheels, so we turned around at Billy Bob’s and went the other direction around the block, jumping the curb at the gravel alley and gingerly walking our skates across that rocky surface.

Roller skating was a favorite after school activity. I remember dashing home to change clothes, donning my stiff-as-a board blue jeans that chaffed between the legs by the end of the afternoon, strapping on my skates with leather ankle straps and tightening the front toe grips until the soles of my brown, scuffed oxfords curled up a bit. I then proudly put my skate key on a string around my neck. The skate key was a very important part of the whole roller skating activity. The skate key (seen in the middle of the picture above) kept wheels on tight and secured the nut on the bottom of the skate that allowed it to be lengthened or shortened. It also tightened the metal toe grips on the front of the skate. Everything had to be secure to keep the skates on the shoe.

I suspect that we became as skilled on our roller skates as the skate boarding youngsters I see today—jumping curbs, going down steps, and facing a variety of uneven surfaces.
Posted by Pat's Place at Wednesday, March 19, 2008