WILDLIFE IN OUR YARD

In the past I have written about the deer that come through our yard on a regular basis, about the baby owls that were born in our neighbor's backyard and now we have begun watching our squirrels play with a new "toy" that my husband found in his Easter basket a couple of weeks ago. It came from Wild Birds Unlimited and is called a Squngee Deluxe Squirrel Feeder.

It is a bungee-type cord that hangs from a tree and has a bell and two screws for ears of corn hanging down from the cord. The squirrel jumps up from the ground and grabs the ears of corn in an effort to pull off kernels while the whole contraption bounces up and down in the air and the bell rings to catch our attention. 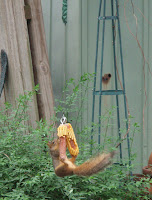 We started out with the corn about a foot above the ground and our squirrel mastered the jump right away. According to directions, we moved the corn about a foot higher. The squirrel jumped and grabbed the corn again so we put the corn four feet from the ground. It is amazing to watch that fat squirrel sit under the corn, jump without any effort to grab the corn, and hang on long enough to grab a kernel or two. We have had a wonderful time watching this amazing feat! We decided we need to enter our squirrel in the Olympics because of his amazing jump from a standing position, but also because of the beautiful back flip he does when he is ready to "dismount" the bouncing corn feeder.

This talented squirrel is very camera shy though. It has taken me more than a week to take these pictures. He works on those ears of corn around noontime each day and I have been grabbing my camera and sitting on the patio waiting for him to start jumping. He first jumps up on a bench near the patio and looks all around before leaping off the bench and heading for the area under the corn. If he sees me on the patio, he runs off and doesn't come back until I go inside. Today I hid behind a bush so he could not see me from the bench and got these pictures! Ha! Success!

And here is one final picture for Little One who does not have squirrels where she lives. When she came for Easter she was fascinated by our squirrels which she called "monkeys" because she had been to the zoo and watched the spider monkeys climb in the trees.
Posted by Pat's Place at Sunday, April 26, 2009