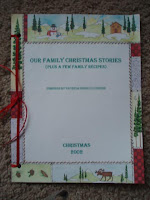 Christmas stories and send them to me. I gathered those stories up into a booklet, printed it out and that was one of my Christmas gifts to the family that year. I have asked several of the family members for permission to print their stories and they have given me the okay. Here is one of my favorites from Son #4:

I will never forget the first Christmas away from my family. I was eighteen and just finished up with boot camp for the Coast Guard and got stationed in California. It was December 1995 and I was new to the Coast Guard and the people at the small boat station. It was Christmas Eve and I showed up for work in the morning and saw all the people go home who had the next two days off and became a little jealous of them knowing they will be with their families. It was just another day at work and being the new kid, the jobs were not the best. Christmas Eve consisted of watching some movies with five guys and just kicking back and relaxing a little.

On Christmas morning about six thirty I woke up and got dressed. Just like any morning I

started my normal routine since I was not told any different the night before. I walked downstairs to a smell I have never smelled before in my life. The officer of the day was cooking in the kitchen by himself since three thirty in the morning. He had food all out on the tables and he asked if I had ever had roasted chestnuts. Saying no, he opened up the oven and had trays of chestnuts (the smell I was not familiar with). Soon everyone got up and came down to enjoy the fine food. When we all sat down to eat the front door opened and all of the people that were off and their families came over to enjoy the day with us since we were stuck at the station. The rest of the day was spent throwing the football, lying

around on the couch, and eating. For the first Christmas away from family I knew I had a new family made up of people that were in my situation once before.


I have not had a Christmas like this one in the Coast Guard since, I don’t know if the people are changing or the mindset of taking care of one another has changed. All I know is I will always remember the first Christmas away from my family could have been sad but I was so full of food and laughter that I was full of holiday cheer.
Posted by Pat's Place at Saturday, December 13, 2008